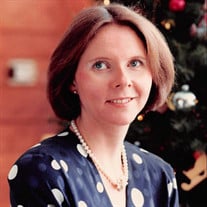 Diane Elizabeth Siegert Sharp passed away peacefully on July 7, 2020, after a valiant fight against lung cancer. Diane was born in Buffalo, New York on September 9, 1952, to Charles (dec.) and Grace (dec.) Siegert. Diane possessed a wonderful love of life, and embraced every challenge including serving in the Peace Corp for 13 months in 2012 in Burkino Faso, Africa. Diane graduated from The College of New Rochelle, New York, majoring in both Mathematics and Economics. Adding to her long list of accomplishments, Diane received an M.B.A. from the University of Michigan, Ann Arbor. Diane joined the Exxon Corporation as an oil trader, and here, she met her husband, Robert Sharp, (dec.). They were married in Greenwich, Connecticut in December 1987. They relocated to their beloved Asheville in 2002 where Diane pursued her many triathlon successes, among which was a fifth place ranking in the World. Diane is greatly missed by her brother, Charles, (Judy), her identical twin sister, Suzanne, (Gus), nephews Dr. Jeffery Siegert, (Megan), Commander Gregory Siegert, (Elisha), Grandniece and Grandnephews, and many, many friends. Diane’s funeral will be celebrated at the Basilica of St. Lawrence, Asheville on 10:00 AM, Friday, July 10, 2020. In lieu of flowers, the family would appreciate a donation towards cancer research to either Memorial Sloan Kettering Cancer Center, Office of Development, Attn. Rachel Flannery, P.O. Box 27106, NY, NY 10087, Gift in honor of Diane Sharp (memo line) or John Hopkins University, Kimmel Cancer Center, P.O. Box 17029, Baltimore, Maryland 21297, Dr. Julie Brahmer (on memo line).

The family of Diane Elizabeth Sharp created this Life Tributes page to make it easy to share your memories.

Send flowers to the Sharp family.