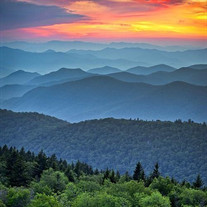 Dorothy W. Holzworth, 87, died on Friday, September 7, 2018. She was born on March 16, 1931 in Asheville, where she also grew up. Her parents Nellie and Paul Wilde were early members of St Mark's Lutheran Church. She also had an elder sister, Betty. Her father, Paul "P.K." Wilde owned and operated the Quality Bakery on Pack Square in Asheville in the early nineteen-twenties and -thirties. She attended high school in Asheville and in Florida, and graduated from Stetson College (now University) in Deland, FL, where she was a member of the Tri Delta sorority. In 1953, she married Herbert Holzworth, also of Asheville. Herbert served in the U.S. Army and was stationed in Germany where they both lived. Their eldest son, Paul was born in Germany. After Herbert's tour of duty ended, they moved back to Asheville where he worked as a Sales Executive for WLOS-TV. Their younger son, Steve, was born in Asheville. Dorothy helped run the Weekday Church School at St Mark's, and served as a Cub Scout den mother. Dorothy and Herbert loved to travel, spending time in Europe and South America. After Herbert's death, Dorothy continued traveling with friends and family, enjoying riverboat cruises. Her last cruise was with daughter-in-law Lisa in 2017, traveling the river Seine in Europe. Dorothy is survived by her son Paul, daughter-in-law Lisa, and grandson Nathan of Raleigh, N.C., by her son Steve of Cary, N.C., and by numerous nieces and nephews throughout the U.S. Services will be held September 29 at 1:00 PM at St Mark's Lutheran Church followed by a reception and then a private graveside ceremony at Riverside Cemetery. In lieu of flowers, Dorothy asked that donations be made to the Pastor's Discretionary Fund at St Mark's Lutheran Church, 10 N Liberty St, Asheville, NC 28801.

Dorothy W. Holzworth, 87, died on Friday, September 7, 2018. She was born on March 16, 1931 in Asheville, where she also grew up. Her parents Nellie and Paul Wilde were early members of St Mark's Lutheran Church. She also had an elder sister,... View Obituary & Service Information

The family of Dorothy Wilde Holzworth created this Life Tributes page to make it easy to share your memories.

Send flowers to the Holzworth family.