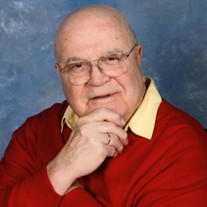 Douglas Edward Joseph Stoodley died March 28, 2017 at his home in Weaverville. N. C. He was born March 14, 1934 in Leicester, England and after the death of his father in 1950, he “crossed the pond” to Massachusetts. Doug met his angel wife, Lyn in Waltham, MA, where they both worked in a medical electronics laboratory facility. In 1982 with the support of Lyn, Doug established his own business in medical imaging. They moved to Weaverville in 1994 where they built their home. In 1997, while overseeing a remodeling project, a tragic accident occurred, subsequently paralyzing Doug and he was confined to a wheelchair for the last twenty years. Theirs was a marriage of unconditional love and Doug’s courage, fortitude and good nature have been an inspiration to all who knew him. He was loved by many – he loved so many! We will miss him. In his retirement, some of his favorite pastimes were cooking, especially grilling, sports and woodworking and being with friends. He was a devoted member of St. Eugene’s Catholic Church. He is preceded in death by his mother, Winifred Murray Stoodley and his father, Cecil Stoodley; his brother, Donald Stoodley of Naples, FL; and his sister Dolores Braun of Detroit, MI. Doug is survived by his pillar of strength, his wife, Lyn of 54 years, his brother, Dale of Wilmington, DE; three wonderful children, Leslie Simpson of Bedford, NH, Kelly Gayle of Portland, ME, and Kevin Stoodley of Pace, FL. In addition, there are eight grandchildren, Shaun, Ryan and Jarrod Stoodley, Andrew, Patrick and Stephen Simpson, Maya and Blake Gayle; and two great grandchildren, Owen and Madison Stoodley. A memorial celebration service for his remarkable life will be held at St. Eugene’s Catholic Church at 11:00AM on Friday, April 28, 2017. Donations may be made in his honor to St. Eugene’s Catholic Church, 72 Culvern St., Asheville, NC 28804, Habitat for Humanity, 32 Meadow Rd., Asheville, NC 28803 or the charity of your choice.

The family of Douglas E.J. Stoodley created this Life Tributes page to make it easy to share your memories.

Send flowers to the Stoodley family.