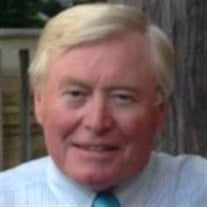 Gary Lee Lawson 74, of Weaverville, passed away on May 21, 2020. He was the son of Glenmore Kirtley Lawson and Lorena Agnes Jones and the husband of Dr. Ellen Lawson. Gary graduated from Churchland High School in Portsmouth Virginia and attended Ol Dominion University prior to his service in the US Army during the Vietnam War. After the war he took responsibility for his younger brother before completing his degree in Mass Communication and Journalism at Virginia Commonwealth University in Richmond, Virginia. He became a Sportswriter for the Virginian Pilot, worked in retail and for the Postal Service. He was a devoted father to three sons, instilling in them a love for their Scotch Irish heritage, history, and storytelling. He was a loving husband supporting his wife in her role as mother, physician and with her international medical ministry. During his last year, he served two months in Haiti, alongside her, at the orphanage in Titanyen with 85 children who loved him dearly. He was a member of St. Eugene Church in Asheville. Besides Ellen, Gary is survived by three sons: Gary Tuch Lawson of Greensboro, Christopher Kirtley Lawson (Amanda Lea) of Asheville and Glenmore Charles Lawson of Weaverville; two grandsons: Dylan John Lawson and Jaden Christopher Lawson both of Asheville; and four siblings: Glenmore Kirtley Lawson Jr (Vicky) of Scottsdale, Arizona, and Helene Lawson, Michael Berry Lawson (BethAnn), and Robert Dwight Lawson (Charlotte) all of Virginia Beach, Va. A mass of Christian burial will be celebrated May 29,2020, at 11 AM at St. Eugene Church in Asheville, N.C. Inurnment will follow at the WNC Veterans’ Cemetery. In lieu of flowers, memorial donations may be made to Sisters of Mercy, either for Sister Peggy, WNC Hispanic Ministry or for Haiti. Please designate which on the memo line of your check. Morris Funeral and Cremation Care is serving the family. Condolences may be sent to them at www.morrisfamilycare.com.

Gary Lee Lawson 74, of Weaverville, passed away on May 21, 2020. He was the son of Glenmore Kirtley Lawson and Lorena Agnes Jones and the husband of Dr. Ellen Lawson. Gary graduated from Churchland High School in Portsmouth Virginia and attended... View Obituary & Service Information

The family of Gary Lee Lawson created this Life Tributes page to make it easy to share your memories.

Send flowers to the Lawson family.