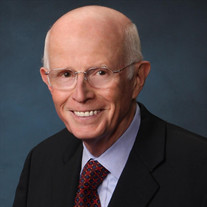 George Marvin Bilbrey, Jr., M.D, died Thursday February 9th 2017 following a brief illness. He was born in Tuscaloosa, Alabama on Oct 15, 1936. He was the son of the late Lucy Skinner and George Marvin Bilbrey, Sr. A 1958 graduate of the University of Alabama, Dr. Bilbrey graduated from the University of Alabama Medical School in 1962. He completed his internship at St. Vincent’s Hospital and residency at the University of Alabama Hospital, where he met Diana Roscoe. They were married on May 11, 1963. Dr. Bilbrey was commissioned into the U.S. Army Medical Corps in 1967, serving on Okinawa during the Vietnam conflict. In 1971, Dr. Bilbrey moved to Asheville where he began his practice as a cardiothoracic surgeon. Dr. Bilbrey performed the second open heart surgery in Asheville. Over the years, Dr. Bilbrey twice served as Chief of Staff at Mission Hospitals (1980, 2003-2007). He served as a member of the Board of Directors of the Mission Health System, Mission Hospitals and Mission Medical Associates. Dr. Bilbrey also worked as Consultant Cardiac Surgeon at the Asheville VA Medical Center. Dr. Bilbrey was proud to call Asheville home and was active in many community organizations. A lover of classical music, he served on the Board of Directors of the Asheville Symphony. He was a Director of the Asheville Area Chamber of Commerce and also served as a volunteer physician at the ABCCM clinic. Dr. Bilbrey had many interests outside of medicine and family. He was an avid tennis player, golfer, and traveler. He was a certified SCUBA master diver and travelled on many dive trips with Diana - frequently assisting with marine biology research studies. He took great pleasure in the world of ideas and could frequently be found with a book, a cup of coffee and a journal. Dr. Bilbrey is survived by his beloved wife of 53 years, Diana Bilbrey of Asheville; two children: son George and wife Bethany of Boulder, CO, son Neville and wife Wyn of Charlotte, NC; four grandchildren: Hilton Bilbrey of Greensboro, NC, David Bilbrey of Charlotte, NC, Nate Bilbrey and Ben Bilbrey of Boulder, CO. Brother-in-law Lt. Col. Ronald Roscoe and wife Gail of Conover, NC, Nephews Jeff Roscoe and Jason Roscoe of Conover, NC and niece Jill Cessna and husband William, grandniece Megan Cessna and grandnephew Grayson Cessna of Tega Cay, SC. In lieu of flowers, memorial contributions may be made to the Juvenile Diabetes Research Foundation Greater Western Carolinas Chapter, 205 Regency Executive Park Drive, Charlotte, NC 28217 (www.jdrf.org); the Mission Health Systems Foundation (designated to the heart program), 890 Hendersonville Rd. #300, Asheville, NC 28803 (www.missionphilanthropy.org); or the Asheville Symphony Society, P.O. Box 2852, Asheville, NC 28802 (www.ashevillesymphony.org). The funeral service will be at Grace Covenant Presbyterian Church at 1pm, Friday, February 17, 2017. The family will receive friends at the church after the service.

The family of Dr. George Marvin Bilbrey Jr. created this Life Tributes page to make it easy to share your memories.

Send flowers to the Bilbrey family.