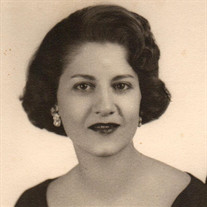 Georgia Xenakis, 90, passed away on December 29, 2016 at Mission Hospital. She was born to James and Stella Stathacos on July 8, 1926 in Raleigh, NC. Besides her parents, her beloved husband, John, predeceased her in 2012. Her parents, immigrants from Sparta, Greece, owned a candy store in Raleigh for many years where Georgia developed a lifelong love of chocolate. Georgia came to Asheville as a young bride in 1958. She was a member of Holy Trinity Greek Orthodox Church and was involved in several organizations and activities at the church, including president of the Ladies Philoptochos Society, a philanthropic organization. Georgia is survived by her sister-in-law, Anna Xenakis; her nieces, Litsa Bambouri of Chios, Greece, Dr. Hope Xenakis and her husband, Ray Dean of Asheville, who oversaw her care at the Laurels of GreenTree Ridge, Elpitha Makridis and her husband, Nick of Bayside, NY, Markella Zouma of Toronto, Canada, Betsy Xenakis of Durham, NC, Xenoula Maria Easton (also a goddaughter) and her husband, Brian and their daughter, Alexandra of Durham, NC and Frances Earnhardt and her husband Brad of Asheville, NC. She is also survived by her godchildren, Chris, Jimmy and Angelica. Georgia’s family would like to thank the staff at the Laurels of GreenTree Ridge for their wonderful care during the 6 ½ years she lived there; also our gratitude to the physicians and staff of Mission Hospital during her final days of life. A Trisagion service will be held at 7:00PM on Monday, January 2, 2017 with visitation starting at 6:00PM at Holy Trinity Greek Orthodox Church. Funeral services will be held at 11:00am on Tuesday, January 3, 2017 at Holy Trinity Greek Orthodox Church with burial at Ashelawn Gardens of Memory. Father Michael Diavatis will officiate at both services. In lieu of flowers, memorials may be made to Holy Trinity Greek Orthodox Church, PO BOX 8369, Asheville, NC 28814.

Georgia Xenakis, 90, passed away on December 29, 2016 at Mission Hospital. She was born to James and Stella Stathacos on July 8, 1926 in Raleigh, NC. Besides her parents, her beloved husband, John, predeceased her in 2012. Her parents, immigrants... View Obituary & Service Information

The family of Mrs. Georgia Xenakis created this Life Tributes page to make it easy to share your memories.

Send flowers to the Xenakis family.