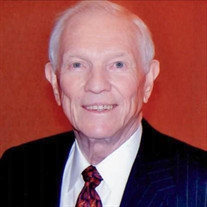 Harold Eugene Gross, Brigadier General (Ret.), United States Air Force, died Tuesday, March 30, 2021 at his home in Asheville, North Carolina. A native of Johnson City, Tennessee, General Gross was born on November 14, 1930 to Harold Clayton and Mary Bowman Gross. He entered the United States Naval Academy in July 1949, graduating in June 1953. General Gross also received a master's degree in personnel administration from The George Washington University, and completed postgraduate education at the Industrial College of the Armed Forces and the Advanced Management Program of the Harvard Graduate School of Business Administration. After graduation from the Naval Academy, he was commissioned a Second Lieutenant in the United States Air Force and subsequently completed navigator and pilot training. After serving as an instructor and squadron commander in the USAF Navigator Training Program, he joined the 63rd Troop Carrier Wing as a pilot and executive officer. During his time with the 63rd, he flew resupply missions to the US scientific station in Antarctica, as well as United Nations relief and evacuation missions during the Congo Crisis. Following this, he served as aide and executive assistant to the Chairman of the Joint Chiefs of Staff, and was then named commander of the United States Element, Berlin Air Safety Center, representing the United States in direct negotiations with representatives of France, the United Kingdom and USSR concerning matters related to air access to Berlin. He subsequently held assignments on the Air Staff at the Pentagon and retired from the Air Force in 1978 as commander of Strategic Air Command's 4th Air Division, which oversaw operations of the 28th Bomb Wing, the 44th and 90th Strategic Missile Wings, and the 55th Strategic Reconnaissance Wing. After his retirement from the Air Force, General Gross was president of Air Asia Company, Ltd., a division of Dallas-based E-Systems, Inc., headquartered in Tainan, Taiwan, Republic of China. Following this, he became a consultant to manufacturers of avionics and communications equipment, successfully representing his clients in sales to governments across Asia and Latin America. He loved traveling the world and talking about his experiences, but he was also very happy retiring to that small corner of the world where he grew up, to enjoy the temperate climate and beautiful seasons offered by the Blue Ridge Mountains. General Gross is survived by his wife of 63 years, Shirley Burleson Gross of Asheville, son Harold Gross and his wife Rebecca and their daughters Margaret and Jane of Irving Texas; daughter Melanie Gross Bentley and husband Kurt and their daughters Kathleen and Kellianne of Dallas, Texas; sister Carolyn Adams of Fairfax, Virginia and numerous nieces and nephews. A private burial will be held at a later date. Morris Funeral and Cremation Care of Asheville, North Carolina, is serving the family, and condolences may be sent to them at www.morrisfamilycare.com. Memorials in memory of General Gross may be made to the United States Naval Academy Foundation, Inc., 247 King George Street, Annapolis, Maryland 21402.

The family of Harold Eugene Gross created this Life Tributes page to make it easy to share your memories.

Send flowers to the Gross family.