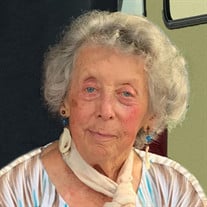 Jeanette Kaufmann Riedy July 27, 1925 - March 23, 2019 Jeanette was born in Kansas City, Missouri, between the World Wars of the Twentieth Century and during the early years of the Great Depression. Her parents, Agnes and Harry Kaufmann, were of German ancestry. Her father Jewish, her mother Catholic. While fully embracing their Jewish heritage, the family was a part of Visitation Catholic Church in Kansas City. Jeanette had a twin sister, Joan, and three other older siblings. Her oldest brother Harry Jr., a journalist, died as a solider during World War II. Gertrude, her older sister, was an artist and a teacher. Sigmund built a business and raised a family on St. Simons Island, Georgia, while Joan raised an active family of eight in Denver. Her father, Harry, was a well-known music impresario in Kansas City during the days of big bands. He died in 1954. Agnes managed their home and family at 27 E. Concord providing a warm and welcoming atmosphere for her active family. She was a story-book grandmother to her grandchildren and passed away after living near Jeanette for many years. Jeanette attended Bryant Elementary and Southwest High before attending and graduating from Kansas City University. After college, she was introduced to her future husband, a tall, dark and handsome man from Milwaukee. She became Mrs. N.J. “Knobby” Riedy on April 25th1953 and soon moved to Milwaukee. Over seven years they had four children, and at the time of her death seven grand-children and one great grand-child. Her children, Avi, Nobby, Mary, and Jane, were with her at the time of her death in Annapolis at Jane’s home. She enjoyed staying part of the last few years with her daughters Jane and Mary in Maryland and on Cumberland Island, Georgia. Jeanette and Knobby were lifelong sweethearts; Jeanette’s love for him never ceased even after his death in August of 1995. After fourteen years in Milwaukee, they moved the family to Georgia and then North Carolina. In Asheville, NC they settled in, purchasing a business that allowed Knobby to be at home evenings, becoming members of their church, joining the country club to play golf and tennis. Jeanette lived in Asheville for fifty-years, a place she had first visited in the 1940s, travelling there by train and overnighting at the Battery Park Hotel. Jeanette enjoyed good health, and over the past two decades she travelled widely, often with her children. Among the many places she visited were New York City, Hawaii, Alaska, and California. She maintained strong and loving relationships with her grandchildren who adored her. She volunteered at her church, St. Eugene, and the Lewis B. Rathbun Center, enjoyed playing bridge, reading and being part of the Chatmore Club. Jeanette was an active and cherished member of the Creekside community in Asheville where she had a home for the past two-decades. Jeanette is remembered for her loving spirit and generosity, the twinkle in her beautiful blue eyes, her fabulous wit, her love for her family, and the openness with which she approached every human relationship. She was a lovely woman and a role model for many young friends. Her strength of character and gentle way was an inspiration. She will be missed, but she will remain in the hearts of all she touched. A Mass of Christian Burial will be celebrated at 11 am on Saturday, March 30 at St Eugene Catholic Church, 72 Culvern Street, Asheville. The family will receive friends prior to the service from 10:00 - 10:45 am. Burial will be immediately after the service at Lewis Memorial Park, 415 Beaverdam Road, Asheville. Memorials may be made to Hospice or the Lewis B. Rathbun Center, or your favorite charity. Morris Funeral Home, 304 Merrimon Ave., is handling arrangements. Condolences may be sent to the family through the website, www.morrisfamilyfuneralhome.com

Jeanette Kaufmann Riedy July 27, 1925 - March 23, 2019 Jeanette was born in Kansas City, Missouri, between the World Wars of the Twentieth Century and during the early years of the Great Depression. Her parents, Agnes and Harry Kaufmann, were... View Obituary & Service Information

The family of Jeanette Kaufmann Riedy created this Life Tributes page to make it easy to share your memories.

Send flowers to the Riedy family.