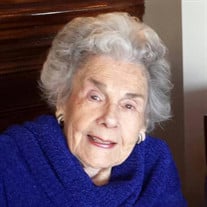 Lauretta Keener Warlick was born on June 8, 1921 in Knoxville, TN, daughter of Samuel Harvey and Lauretta Callahan Keener. She graduated from Georgetown Visitation and the University of Tennessee and worked for Pennsylvania Central Airlines where she met and married the late Bill Warlick, on January 4, 1946. They moved to Asheville, NC in 1948. She is survived by her children, M.E. Warlick, Mollie Warlick, and William L. Warlick, Jr. of Asheville, NC, daughter Laurie and her husband Doug McSpadden of Belmont, NC and son Robert Warlick of Landrum, SC, and her grandchildren Jennifer Thurston of Paradox, CO, Mario Smith and his wife Sophie of Pearland, TX, Callahan Warlick of San Diego, CA, Harrison McSpadden of Greenville, SC and Connor McSpadden of Norfolk, VA. Her great-grandchildren are Victoria, Andrew and Mario Smith, III. She is also survived by her sister, Laura Keener Kreis and her brother, Samuel Harvey Keener III, both of Tennessee. Lauretta taught at Little Beaver, St. Genevieve’s, St. Joan of Arc, and Gibbons Hall. She and Bill owned and operated Beacon Travel Service for seventeen years. She was an avid reader and loved exploring the world, traveling throughout the United States, Canada, China, Australia, New Zealand, and Europe, especially Italy and France, and her favorite city of Paris. She was a founding member of The Gardenieres, former member of the Junior League of Asheville, and a member of the Asheville Country Club. A memorial mass will be celebrated at 11:00am on Thursday, May 30, 2019 at St. Eugene’s Catholic Church with Rev. Patrick Cahill officiating. Interment will follow immediately at Lewis Memorial Park. She had been a member of the church since its opening and had also served on the Women’s Altar Guild. In lieu of flowers, donations could be sent to Hospice, or to a charity of your choice. She wanted everyone to know it was a joyful life.

Lauretta Keener Warlick was born on June 8, 1921 in Knoxville, TN, daughter of Samuel Harvey and Lauretta Callahan Keener. She graduated from Georgetown Visitation and the University of Tennessee and worked for Pennsylvania Central Airlines... View Obituary & Service Information

The family of Lauretta Keener Warlick created this Life Tributes page to make it easy to share your memories.

Send flowers to the Warlick family.