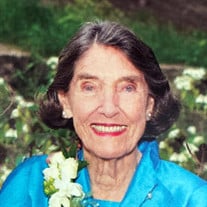 Marilyn Smith Iles, 94, of 233 Sugar Hollow Road, Fairview, North Carolina, died at her home of natural causes on Sunday, June 21, 2020.  She was born February 27, 1926 in Syracuse, New York, the daughter of Wallace M. Hughes and Isabel Ruth Hughes.  She moved to Fairview from Syracuse in 1988 to be close to her parents who came to Sugar Hollow in 1963. Marilyn graduated from Syracuse University in 1948 where she was a member of the Alpha Phi Sorority.  She married Wilbert Lewis Smith 2nd in 1948 and they were married for 29 years until his death in 1977.  She married Walter G. Iles Jr. in 1980. They were married for 16 years until his death in 1996. Marilyn had a lifelong love of nature, walks in the woods, the songs of birds and the beauty of the mountains. She was active in the Syracuse Garden Club and the French Broad River Garden Club. Marilyn's gardens were featured in a publication by the Smithsonian. She was a volunteer in many civic organizations in Syracuse including Harmony Circle, Planned Parenthood, the Junior League and the Everson Museum of Art.  In Fairview she was a volunteer reader to children in Head Start. Marilyn was a former member of the Onondaga Golf and Country Club in Syracuse and the Biltmore Golf and Country Club in Asheville.  Mrs. Smith Iles is survived by her four children, Wilbert Lewis Smith, III (Lulu) of Fairview, Marilyn Smith Jeffery (John) of Silver Spring, Maryland, Patricia Smith Slater (David) of Tryon, North Carolina and Wendy Smith Mikelsons (Ivars) of Oak Creek, Colorado, nine grandchildren and thirteen great grandchildren.  She is also survived by her step-children, Susan Iles O'Leary of Fairport, New York and Cathy Iles Davenport (Chris) of Asheville, seven step-grandchildren and ten great step-grandchildren.  She is predeceased by her step-children Walter G. Iles, III, Nancy Iles Berger and John B. Iles. A private service will be held in September in Syracuse, New York.  A family celebration of life will be held in the summer of 2021 in Eagle Bay, New York. Contributions may be made to the Syracuse Garden Club, French Broad River Garden Club or Planned Parenthood.

The family of Marilyn Smith Iles created this Life Tributes page to make it easy to share your memories.

Send flowers to the Iles family.