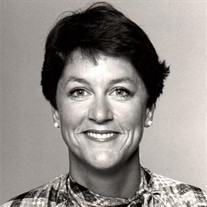 Martha Muilenburg (Barrie) Sneed of Asheville, NC died peacefully at home on November 29, 2018 after a long, brave encounter with Parkinson’s Disease. The eldest of three daughters, she was born in Washington, DC on Sept. 25, 1944, to Paul Luther Muilenburg of Sioux Falls, SD, and Martha Dulin Muilenburg of Charlotte, NC. Raised in Charlotte, she grew up in an elegant old house with a big yard where she enjoyed high speed badminton with her sisters and delicious cookouts with her large, extended family of Dulins. She graduated from Myers Park High School, then attended the Women’s College of UNC at Greensboro and graduated from UNC Chapel Hill in 1966 with a degree in education for Special Needs children. Barrie taught Special Education in the schools of Virginia Beach, VA, Middletown RI, and Durham, NC. In 1967, she married her college beau, Lt JG Albert Sneed, Jr. Soon after, they moved into a charming carriage house in Newport, RI. In 1969 when her husband deployed to the Sixth Fleet, Barrie was able to follow the fleet from port to port and tour Europe when the fleet was out at sea. It was a glorious trip. After the Navy, Barrie and Albert toured the U.S. in a pick-up truck and camper before Albert entered Duke Law School in 1970. While her husband was in Law School, Barrie delivered their first son Lee on the day of the Trusts and Estates final exam. Albert could be seen studying feverishly by her bedside light at Watts Hospital. After moving to Asheville in 1973 and having her second son Paul, Barrie became active in her community through the Junior League and other volunteer organizations. She served on the Board of Directors of the Junior League and the United Way, chaired the Public Relations Committee of the Junior League and the United Way Allocations Committee, was co-chair of the First Southern Conference Basketball tournament, chair of the 1989 Bele Chere Festival, and coordinating director of the first City of Asheville Light Up Your Holidays Festival. Barrie was elected to the vestry of Trinity Episcopal Church where she also served as Senior Warden. Besides contributing to her community, she shared her many talents. She had a wonderful voice and loved to sing. She’d grown up listening to gospel on the radio, and after being diagnosed with Parkinson’s, she crossed off an important entry on her bucket list by auditioning in 2012 for the Charleston Symphony Gospel Choir. After being accepted, she drove four and a half hours to Charleston every week for nearly a year to practice and perform. It was one of the highlights of her life. Singing wasn’t Barrie’s only passion. Of the three sisters, Barrie was the dancer. Her innate virtuoso rhythm led her as a teenager to become a whirlwind on the dance floor when the Beach Step arrived. Despite the Parkinson’s, she danced gracefully, fast, and on beat with her son Lee on the day of his wedding in October, 2013. Barrie had an unstoppable creativity that shone through everything she did, from cooking to decorating to writing travel postcards or thank you notes. She also had a wonderful warmth, empathy and smile for everyone she met. She could find something in common with anyone and most always left them with a trademark humorous quip that made them smile too. Her life was filled with fun and laughter. Barrie is survived by her husband of 51 years, Albert L. Sneed, Jr.; her son, Albert Lee Sneed, III and his wife, Kristen Cline Sneed; her son, Paul Ryman Sneed, and his wife, Tracie Sexton Sneed and granddaughters, Mattie Kae and Lucille Barrett, all of Mount Pleasant, SC. She is also survived by her sisters, Lisa M. Carrigan and her husband, Michael of Alexandria, VA, and Jo Muilenburg of Mill Valley, CA; many cousins, nieces and nephews; and by her angel, Ona Hensley. Barrie will always be remembered for her sunny disposition, the humorous asides she came up with in every situation and the kindness she showed to everyone she met. She will be greatly missed by her family, not only close kin and long-time friends, but also those who only “passed by her once, but remember it with affection.” The family extends special thanks to Dr. James Patton, Dr. Clay Ballantine; caregivers, Ona Hensley, Najee Norris and Lillian Davis, and the wonderful staff at Care Partners Palliative Care. A service to celebrate the Resurrection to eternal life will be held at Trinity Episcopal Church, 60 Church St., at 11:00AM on Friday December 7, 2018. A reception will follow in Tuton Hall. Memorial gifts may be made to Homeward Bound, 218 Patton Ave, 28801 or Trinity Episcopal Church, 60 Church St., Asheville 28801.

Martha Muilenburg (Barrie) Sneed of Asheville, NC died peacefully at home on November 29, 2018 after a long, brave encounter with Parkinson&#8217;s Disease. The eldest of three daughters, she was born in Washington, DC on Sept. 25, 1944, to... View Obituary & Service Information

The family of Martha (Barrie) Sneed created this Life Tributes page to make it easy to share your memories.

Send flowers to the Sneed family.