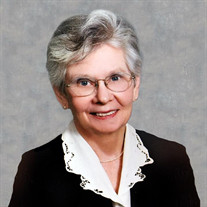 Mary Taylor Todd, 86, of Black Mountain died Wednesday, October 17, 2018. Born November 25, 1931 in Winston-Salem, NC, she was the daughter of the late Archibald Boggs and Margaret Webb Taylor. She was preceded in death by her son, Wayne Perrin Todd Jr. in 2011 and her siblings; Archibald Boggs Taylor, a missionary to Japan for 40 years and Elizabeth Taylor Zipf. Mary met her first husband Wayne Perrin Todd while attending Southwestern at Memphis (now Rhodes College). They were married in 1952 and spent their first year of marriage in Vienna Austria where Wayne was a Fulbright Scholar. They later lived in Richmond, VA while Wayne attended Union Seminary. The couple served Atkinson Memorial Presbyterian Church in Morgan City, LA and were then called to First Presbyterian Church in Florence, AL. Over the course of their marriage the couple had five children. During the 34 years they spent at the church in Florence, Mary was a very active pastor’s wife. She hosted many guests, both local and foreign, serving the church in many roles. She was a Deacon, Elder, Choir member and served on many various committees. Over the years, Mary held several different jobs; she taught at Genesis Alternative School, was a Librarian at Hibbett Junior High School and was an Administrator at the YMCA of the Shoals. She still found time to serve on the PTA and volunteer at her childrens’ schools. After moving to Asheville in 1997 and the death of Wayne, Mary became active in the First Presbyterian Church of Asheville where she was the recipient of the Presbyterian Women Honorary Life Membership. She led Bible studies in the Presbyterian Women’s group and made bread for communion. She enjoyed serving meals for A-HOPE and Saturday Sanctuary and helping to host Room at the Inn. Mary also served part-time as a funeral associate at Morris Funeral Home for many years. In 2008, Mary married Robert Montgomery. They had met at Southwestern when Mary was a freshman and Bob was a senior about to go off to Seminary. They would have been married ten years this December. Mary and Bob spent the last five years as residents of Givens Highland Farms in Black Mountain, NC. Mary was always known for her sweet spirit, her generosity, her kind heart and willingness to “pitch in” to every job that needed to be done. She is survived by her husband, Rev. Dr. Robert L. Montgomery; children, Rev. Dr. Taylor Todd (Abby), Alice Butker (Bennett), Martha Sloan (Ross), Charlotte Fitzpatrick; daughter-in-law, Donna Marie Todd; nine grandchildren, Torey, Caroline, Taylor, Robert, Mary, Grayson, Siler, Hunter and Jack; two great-grandchildren Zachary and Claire; sister, Katharine Taylor Coghill of Portland, OR and eight nieces and nephews. A Service of Witness to the Resurrection and Celebration of the life of Mary Taylor Todd will be held 2:00 PM, Saturday, November 10, 2018, at the First Presbyterian Church of Asheville, 40 Church Street, Asheville, NC. In lieu of flowers, the family asks that you make donations to First Presbyterian Church, Asheville - https://www.fpcasheville.org/ways-to-give/ or Homeward Bound of WNC - https://homewardboundwnc.org/donate/

Mary Taylor Todd, 86, of Black Mountain died Wednesday, October 17, 2018. Born November 25, 1931 in Winston-Salem, NC, she was the daughter of the late Archibald Boggs and Margaret Webb Taylor. She was preceded in death by her son, Wayne Perrin... View Obituary & Service Information

The family of Mary Taylor Todd created this Life Tributes page to make it easy to share your memories.