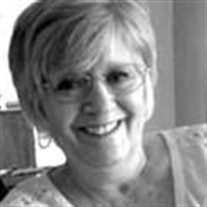 Becky was born to a young couple in Winterset, Iowa in 1953. She was the second of what would grow quite quickly into a family of six children. Her childhood years were well-traveled (at least across the eastern U.S.) until the family settled in Asheville when she was a teenager. She graduated from Asheville High, and attended UNC-A, where she met and fell in love with a fellow-student. They were married at St. Mark's Lutheran Church. She wore her mom's wedding dress. They had three kids here, then they all followed his work to Kansas City. After her marriage ended, she raised those children on a restaurant server's pay (making her a generous tipper all her life). She returned to Asheville after her mother died in 2012 to live with and care for her father. She died in their home on Tuesday, June 25. If you knew her, you can easily see how feeble these few facts are at describing a life of such generosity of spirit and sacrifice. Just any ordinary day with her would be strung with moments of kindness, humor, selflessness, support, encouragement, and grace like pearls or Christmas lights. Her father, Jack, her children, Matt, Ben, and Lisa, her granddaughter, Hayden, her siblings Mark, John, Matt, Gretchen, and Heidi, all of her nieces and nephews, all of her in-laws and her last few cousins are bereft. And all those abused women and unloved dogs and bedridden patients and restaurant servers and random people who fell into the light that shined around her are less a true and loving friend. Becky added to the good in the world, and the world is diminished without her. Hug your family and play an old Beatles song for her. If she could, she'd ask you to remember her by making a gift to KC Pet Project (kcpetproject.org).

Becky was born to a young couple in Winterset, Iowa in 1953. She was the second of what would grow quite quickly into a family of six children. Her childhood years were well-traveled (at least across the eastern U.S.) until the family settled... View Obituary & Service Information

The family of Rebecca Wilson Dyer created this Life Tributes page to make it easy to share your memories.

Send flowers to the Dyer family.