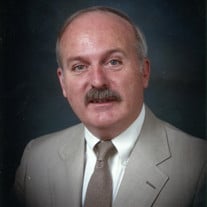 The Very Reverend John Campbell Lathrop, 84, Dean of Appalachia and retired Rector of St. Matthews Anglican Church in Weaverville, NC, passed away due to complications from surgery on December 9, 2015 in Asheville, NC. Best known as Fr. John, he was born in 1931 in Detroit, Michigan to Irving and Thelma Lathrop. He completed high school at Christ School in Arden, NC in 1949, went on to earn his Bachelor's degree at UCLA in 1955, graduated with both a Bachelor's (1958) and Master's degree (1972) from the Episcopal Theology Seminary of the Southwest, received his PhD from the California Graduate School of Religion in 1974, and graduated from Command and General Staff College in Ft Leavenworth, KS in 1975. Fr John came from a long line of Rectors and was named for his progenitor the Reverend John Lothropp, who came to America from England almost 300 years ago. What was said of his ancestor could be said of him: "He was a man of humble spirit lively in the dispensation of the Word of God, studious of peace, furnished with godly contentment, willing to spend and be spent for the cause of the Church of Christ." He was loved by many and will be sorely missed. He served as an active minister for the Episcopal and Anglican church for over 50 years, serving with parishes in California (Compton-Watts, North Hollywood, South Pasadena, La Canada-Flintridge, and San Jacinto) and establishing parishes and missions in North Carolina and Tennessee. From 1979 - 1995, he was the President and Executive Director for the Center for Community and Family Services in Pasadena, CA. From 1991 to 1994, he served as Executive Director of the Church Commissioners of the Anglican Church of Uganda. He was installed as a Provincial Canon of All Saints Cathedral in Kampala, Uganda and was made an Assistant to the Bishop, Central Diocese, of the Evangelical Lutheran Church in Tanzania. During his tenure with the Anglican Church of Uganda, Fr. John organized, developed, and managed the first successful nationwide HIV/AIDS prevention and education program for Uganda. He also worked as Coordinator of the Tanzania AIDS Project through the Evangelical Lutheran Church in Tanzania. In addition to his service to the Church, he also served his country in the Army and Army Reserve. After earning twenty eight decorations and awards, including the Legion of Merit award, he retired after 38 years as a Chaplain (Colonel). At the time of his death, he served as a Trustee for the Mebane Charitable Foundation of Mocksville, NC. He is preceded in death by his parents, Thelma and Irving Lathrop and by his brother, Henry. He is survived by his wife Leslie and his children Kathy Gibbons, Shelby Lathrop, Karen Munroe, George Rees, Martin Lathrop, Melissa Lathrop, and Annie Cross, fifteen grandchildren and eight great-grandchildren. Services will be held at St. Matthew Anglican Church, 812 Reems Creek Road in Weaverville, NC on Thursday Dec. 17 at 11:00 am. The family wishes to extend their appreciation and gratitude to the staff of the John F. Keever, Jr, Solace Center Hospice in Asheville, NC and ask that any donations to be made in Fr. John’s honor be sent to Care Partners Foundation, 20 Rotary Dr., Asheville, NC 28803.

The family of The Very Reverend John Campbell Lathrop created this Life Tributes page to make it easy to share your memories.

Send flowers to the Lathrop family.