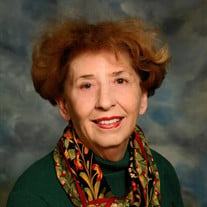 “Sally” Sara Marjorie Lewis Rhoades, 80, passed away Monday, September 24, 2018, at Deerfield Retirement Community. Born in Asheville on May 29, 1938 to the late William Figures Lewis and Mary Best Lewis. Sally and her sister, Landon, lived on the campus of The Asheville School where their father taught and coached for many years. She graduated from St. Genevieve of the Pines, St Mary’s College in Raleigh and UNC-Chapel Hill where she received her BA in Education and her MA in Art History. While working in New York City, Sally met and married Domokos Pasint who died unexpectedly in 1969. Several years after returning to Asheville, Sally married Verne Rhoades, Jr. They lived briefly in Berkeley, CA and returned to Asheville to live in the historic Rhoades home on Merrimon Avenue. Together, they maintained and lovingly cared for this unique property until Verne’s death in 2007 when it was donated to UNC-Asheville by the Rhoades family. Sally always had a keen interest in the life of Asheville and its mountain community especially regarding beautification and the environment. She served on the boards of Asheville Art Museum, WNC Community Arts Council, WNC Nature Center, RiverLink, Asheville Junior League and The Asheville Symphony. In the early 90’s, she was a leader in the development of Pack Place as well as the planning for restoration of The Grove Arcade. As a long time member of the French Broad River Garden Club, Sally shared her enthusiasm for gardening and concern for conservation issues over many years. Sally loved family gatherings, classical music and travel to historical gardens in the United States and Europe. Sally demonstrated her love of “all creatures great and small” especially frogs and elephants by being a strong advocate for animal welfare organizations. She was a lifetime member and past Elder at First Presbyterian Church of Asheville, The Colonial Dames of America and the Biltmore Forest Country Club. Sally is survived by her sister, Landon Lewis Fox (Tom) of Chapel Hill; her devoted nieces, Katharine F. Stewart (William) of Falls Church, VA, Carter F. Eagle (Steven) of Savannah, GA and Sara F. Boyce (Burns) of Raleigh, NC; cousins, Susan T. Rice (Edward) of Midlothian, VA and Mary T. Collins (Larry) of Cleveland, TN. She is also survived by great niece, Averil Eagle Brannen (David); great nephews, William Fox Stewart, Benjamin Thomas Stewart, Jeremy Robert Stewart, Tucker MacDonald Eagle, Cooper Thomas Boyce and Peyton Bryan Boyce (Sarah); sister-in-law, Anne Rhoades Farquharson (Robert) and brother-in-law, William Rhoades (Betty). A Celebration of Life will be held 2:00 PM, Wednesday, October 3, 2018 at First Presbyterian Church of Asheville. Reverend Patrick Johnson will officiate. Private interment will be held at Riverside Cemetery. Memorials may be made to Asheville Humane Society or CarePartners Hospice. The family wishes to thank Dr. Clay Ballantine, Premier Care Services and Jeanette Harding for their devoted care of Sally.

The family of Sally Lewis Rhoades created this Life Tributes page to make it easy to share your memories.

Send flowers to the Rhoades family.