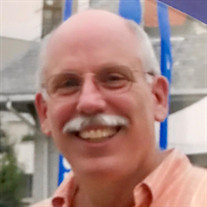 Scott Daniel Staples, resident of Asheville, NC, formerly of Rochester and Glens Falls, NY, died suddenly on April 13, 2018 at age 68. Scott was born on August 23, 1949, and raised in Rochester, one of seven children. He enlisted in the U.S. Army and volunteered for deployment to Vietnam, but, upon arrival in country, his records were reviewed and revealed his brother was already serving there. As a result, Scott was immediately shipped from Vietnam to Germany and was honorably discharged at the rank of corporal. He earned a GED while in the Army, and attended Monroe County NY Community College, Saint John Fisher College, and Albany Law School, where he earned his juris doctorate. Scott worked as a master plumber into his 40s, when he passed the NY State Bar exam and was sole proprietor of Staples Law Firm in North Creek, NY. He was elected to a Warren County NY family court judgeship, after campaigning door-to-door in the Adirondack mountains. In 2014, he moved to Asheville and at the time of his death worked for ACE Hardware on Merrimon Ave. Scott had a markedly warm, open, and generous nature. He was primarily and obviously interested in people, and his work in the plumbing department at ACE helped fulfill his need to be of service to others. He will be profoundly missed by his partner, Jean Hansman, who was by his side at his passing, and by his sister, Jan Staples, and three surviving brothers, William, Richard, and Stephen Staples, as well as by his many friends. He was predeceased by his parents, Norman, Sr. and Inez Steklof Staples of Rochester, and two other brothers, Norman, Jr. and Joseph Staples. A gathering of friends will be 2:00 - 4:00 PM, Sunday, April 29, 2018 at Morris Funeral Home, 304 Merrimon Avenue, Asheville, NC. Memorial donations in Scott's name may be made to Brother Wolf Animal Rescue of Asheville, 828-505-2017.

Scott Daniel Staples, resident of Asheville, NC, formerly of Rochester and Glens Falls, NY, died suddenly on April 13, 2018 at age 68. Scott was born on August 23, 1949, and raised in Rochester, one of seven children. He enlisted in the U.S.... View Obituary & Service Information

The family of Mr. Scott Daniel Staples created this Life Tributes page to make it easy to share your memories.