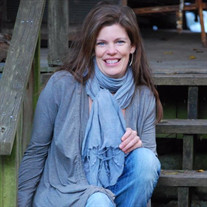 Stephanie Hayden Smith of Asheville, North Carolina died peacefully at her home, Monday, August 11, 2017, after battling pancreatic cancer. She was 46. Without realizing it, she lived her everyday life as a bucket list. Unencumbered by the conventional trappings of a spouse and offspring, she pursued her many loves, which included the Grateful Dead, fly-fishing, tennis, expensive footwear, fine wines, travel to foreign lands and Russian tennis player Marat Safin – not necessarily in that order. She was an avid gardener and made it her mission to relocate the squirrel population from her yard to other locales across Asheville and beyond. Born in Asheville, Stephanie graduated from The Asheville School in 1989. She also attended Asheville High. She played many sports in high school including tennis, basketball, and her favorite, field hockey. During her college years, Stephanie attended UNC-Greensboro before transferring to California State University – Chico in Northern California. She graduated with a Bachelor of Arts Degree in Journalism and minored in English. During her time in California, she traveled extensively with the Grateful Dead and somehow managed to graduate with honors. She referred to this period as “good time management.” She sold dresses, T-shirts, stir fry and grilled cheese sandwiches to pay her way through the Dead’s many tours, which is where her entrepreneurial skills and fierce independence were honed. Stephanie returned to Asheville in 1997 and became communications director for Peppertree Resorts. In 2002, she opened her own marketing and branding firm, The Brite Agency. She also founded a publishing company, Yellow Jacket Publishing, which produces and distributes the in-room hotel book “A Look at Asheville.” One of her greatest joys was seeing her businesses succeed through good times and bad, and gave much of this credit to her steadfast employees whom she loved like family. In 2005, Stephanie decided to pick up her tennis racquet again and played league tennis out of The Grove Park Inn. In 2010, she finished the year as the #1 3.5 player in the state. She also enjoyed traveling to see ATP tennis and was resourceful enough to have her photo taken with just about every professional tennis player she liked. She attributed this luck to “superior recon” and “excellent stalking abilities.” Her travels were not only tennis focused. Stephanie wanted to see the world and got a big chunk of it checked off her list. Turkey, Russia, New Zealand, Argentina, Australia, Canada, Czech Republic, Hungary, France, Monaco, England, Croatia and Greece are just some of the countries she visited along with countless Caribbean islands. An unforgettable hostess, Stephanie loved to entertain, making fancy entrees, distinctive cocktails and setting out the fine china and silver service. Many people experienced her parties and the special ambiance she created. She offset this Martha Stewart behavior by sometimes camping with friends, bringing Zen seating areas or firing up a disco ball off the back of her Lexus to get the dance party started. More importantly she loved to fly fishing with her father in remote parts of the world and treasured the time she spent with him on majestic rivers. Stephanie volunteered her time and agency’s expertise with various organizations in Asheville including Helpmate, The Asheville Area Arts Council, Asheville Sister Cities, Asheville Downtown Association and Mountain Housing Opportunities. She also spearheaded a project to preserve the legacy of St. Genevieve Gibbons Hall School and its predecessor schools with Carolina Day School. Stephanie is survived, and revered, by her father, Frank S. Smith III of Asheville, aunt Beatrice and uncle Thomas Maybank of Rocky Face, Ga., her cousins Thomas Maybank of Blufton, S.C. and Beverly Burgdorf of Williamsburg, Va., Canie and Lynn Smith of Asheville, Blake Smith of Bat Cave, N.C., Whitney Smith de Vargas of Asheville, Bretney and Coleman Smith of Asheville, cousin Stacy Smith of Asheville, godmother Joyce Sanders of Raleigh, N.C., her dearest friends, Andrée D. Ramey of Asheville, Amy L. Parker of Black Mountain, N.C. and Kristi Lawton of Asheville, N.C., her loyal companion, Harry the PBGV, whom she loved with every ounce of her being, and literally hundreds of friends who will never recover from the loss of this exceptional, gorgeous, witty and kind woman. She was a force larger than life and maybe that’s why she was taken from us too soon. Stephanie lived more in her 46 years than most of us will do in a lifetime. For those of you who knew her well, you know that she would want no funeral. Instead a celebration of life, music and people she loved will be held in the chapel of Morris Funeral Home, 304 Merrimon Avenue, Friday, August 11, 2017 at 11 AM. The family will receive friends one hour prior to the celebration at the funeral home. A private ceremony will be held at Riverside Cemetery in Asheville for the family. In lieu of flowers, tchotchke or casseroles, Stephanie and Frank set up a fund Frank S Smith and Stephanie H Smith Fund within the V Foundation. This fund goes to fund research for pancreatic cancer, a cancer that is not easy to beat. The fund also represents the life-long bond Stephanie had with her father and N.C. State basketball. Stephanie was happy to have her photo taken with Mr. Wolf at age five and at age 45. Frank took her to games all her life and in 1983 they attended the ACC final in Atlanta, the year Jim Valvano and his Cinderella team won it all. There is no better ending to this story than helping to find a cure for pancreatic cancer via Jim’s foundation. Go Pack! Go Steph! To donate, visit http://jimmyv.convio.net/goto/stephaniesmith

Stephanie Hayden Smith of Asheville, North Carolina died peacefully at her home, Monday, August 11, 2017, after battling pancreatic cancer. She was 46. Without realizing it, she lived her everyday life as a bucket list. Unencumbered by the conventional... View Obituary & Service Information

The family of Miss Stephanie Hayden Smith created this Life Tributes page to make it easy to share your memories.