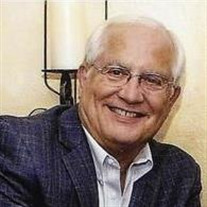 Asheville, NC - Wayne Alan Luce passed away at his home in Asheville NC on July 16th, 2021 at the age of 75. He is survived by his wife of 54 years Carolyn Roberts Luce, his siblings Laurilla Luce Nash & John Luce, His son Timothy, and his grandchildren Katharine and Audrey. Born in Rochester PA and raised in Freedom PA, Alan excelled at athletics and academics at Freedom Area High school before graduating in 1963. Alan earned his undergraduate degree from Westminster College in New Wilmington, Pennsylvania in 1967 then went on to pursue a career in law and earned his J.D. from Vanderbilt University School of Law in Nashville, Tennessee in 1970. During these years, Alan met Carolyn Roberts while at Westminster College, got married in 1967, to be followed by the birth of their son. After Vanderbilt Law School, Alan began his career as an Assistant City Attorney in Rochester NY (1970-1972) where his career would take a dramatic turn while executing the duties of his position. He got noticed by the Direct Selling Association (DSA) while they were lobbying local legislation as Alan showed an even hand in serving the interests of all parties. Alan ultimately would be approached to join DSA in Washington, D.C. as an Associate General Counsel for the organization (1972-1976). During this time Alan would be influential in building an organization to protect its members, along with the public, by participating in the creation of guidance and laws in 49 states plus at the federal level. In 1976, Alan was approached by Tupperware Home Parties to join its staff as General Counsel with the initial task of creating an internal law department. During the course of his 16 years at Tupperware he eventually escalated to the role of Vice President of Administration and General Counsel. During this time when his career continued to grow and transcend law, he earned his MBA from the Crummer School of Business at Rollins College in Winter Park, Florida in 1986. Post Tupperware, Alan would work directly for other direct selling organizations such as DK Family Learning (Founder and CEO), PartyLite Gifts (Senior Vice President of Sales & Marketing), and Wildtree Herbs (CEO). Eventually - and for the betterment of the direct selling industry - Alan decided to take another turn in his career to found a consulting organization - Luce & Associates - focused on helping other direct selling companies. Alan and his organization became the go-to experts within the industry, especially for working with start-ups and designing compensation plans for new and existing direct selling companies. The consulting organization took many forms over the years and shifted into Strategic Choice Partners in 2015. As a consultant, Alan was contracted by more than 100 direct selling companies, and was continually sought out for advice and guidance. Direct Selling is an industry where Alan would spend his career and become one of the industry's most well-known and beloved figures. Perhaps more than anyone else in the industry, Alan Luce has served and succeeded in just about every facet of direct selling. He also received virtually every award the direct selling industry had to give over his career, and served in just about every role. Alan served many years on the board of directors for both the DSA and the Direct Selling Education Foundation (DSEF), and served terms as the Chairman for both organizations. In 2002, he was recognized for his vision and leadership in DSEF when he was selected to receive the Circle of Honor award. In 2005, Alan was inducted into the Direct Selling Hall of Fame, acknowledging in his career achievements and leadership within the industry, and his impact on it. More than anything, Alan has had a profound impact on his colleagues in ways that far surpass just his business expertise. Alan was known for never shying away from clearly articulating his thoughts and recommendations, while also showing empathy and understanding for everyone with whom he interacted. He exuded a rare mix of visionary and practical operator, and it was this mix that made him such an approachable and sought out resource. Outside of the career which defined him, Alan - along with his wife Carolyn - loved to travel the world to witness and experience fantastic things, in particular their trips to Southern Africa. When not traveling, they loved living in Asheville NC with a good group of friends within an eclectic city. Alan Luce lived a full life, and he lived it in a way that touched many, many people. He will be missed, but his impact will always be felt.

Asheville, NC - Wayne Alan Luce passed away at his home in Asheville NC on July 16th, 2021 at the age of 75. He is survived by his wife of 54 years Carolyn Roberts Luce, his siblings Laurilla Luce Nash & John Luce, His son Timothy, and his grandchildren... View Obituary & Service Information

The family of Wayne Alan Luce created this Life Tributes page to make it easy to share your memories.

Asheville, NC - Wayne Alan Luce passed away at his home in Asheville...

Send flowers to the Luce family.