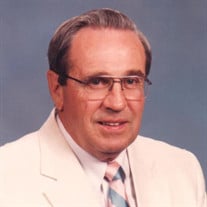 William Fleming Browne Jr. passed away peacefully after a long struggle with Alzheimer's disease, April 30, 2017, at the North Carolina Veterans Home. Mr. Browne was born in Memphis, TN on March 29, 1928. His family moved to Asheville in 1936. Fleming was educated in his early grade school years at St. Genevieve's of the Pines. He attended high school at Georgia Military Academy in College Park, GA. He graduated from Spring Hill College in Mobile, AL with a degree in Business. After enlisting in the US Air Force, Fleming was selected to be an instructor in the Officers Candidate School where he was stationed at Lackland Air Force Base, San Antonio, TX. He is survived by his loving wife of 61 years, Marilyn Vincent Browne. He was preceded in death by his son Francis Vincent Browne. Surviving are his children: William Fleming Browne III (Trip) of Asheville, Maier Browne Runyon and husband Scott of Atlanta, Timothy Calnen Browne and late wife Stephanie of Asheville, Ellen Browne McGuire and husband Joe of Asheville, Laura Browne Livaudais and husband Durel of Asheville. He is also survived by 12 grandchildren, William Browne, Caroline Browne, Jonathan Runyon, Stephanie Runyon, Mary Elizabeth Runyon Johnson, Catherine Runyon, Lauren Browne, Lindsey Browne, Sarah Katherine McGuire, Caleb McGuire, Margaret Livaudais and Grace Livaudais, and two great grandchildren: Stella Runyon and Benjamin Runyon. He is also survived by his brother Ray Browne and wife Brenda of Asheville, and many nieces and nephews. Fleming was an active member of Saint Eugene’s Catholic Church, where he served on the parish council. He also was a 4th Degree member of the Knights of Columbus. He was a member of the Country Club of Asheville where he served on the Board of Directors and was an avid golfer. He also served as President of the Appalachian Lumberman’s Association. His interest included travel, golf and time spent with family and friends. A Rosary service and visitation will be held on Friday, May 5th at 5:00pm at Saint Eugene’s Catholic Church, the Funeral will be Saturday, May 6th at 11:00am at St Eugene’s Church. In lieu of flowers the family ask that donations be made to Memory Care of Asheville, 100 Far Horizons Lane, Asheville, N.C. 28803

William Fleming Browne Jr. passed away peacefully after a long struggle with Alzheimer's disease, April 30, 2017, at the North Carolina Veterans Home. Mr. Browne was born in Memphis, TN on March 29, 1928. His family moved to Asheville in... View Obituary & Service Information

The family of Mr. William Fleming Browne Jr created this Life Tributes page to make it easy to share your memories.

William Fleming Browne Jr. passed away peacefully after a long...

Send flowers to the Browne family.