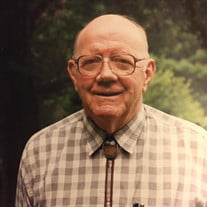 William H. Haggard, 98, of Asheville passed away on Friday, June 21, 2019 at Deerfield Retirement Community. Bill Haggard is one of those very fortunate people who early in life knew what they wanted to do and did it. Born in Woodbridge, CT during a snowstorm in November 1920 to Dr. Howard W. and Josephine F. Haggard, his earliest memories were of a fascination with weather. He received a B.S. in Physics from Yale in 1942; went directly into the United States Navy who sent him to meteorology training at MIT where he received a certificate of Professional Meteorologists in late 1946. In WWII, he was assigned as an Aviation Weather Forecaster at the Naval Air Station in Jacksonville, FL for a year, then he served as an Escort Carrier for 17 months at sea in the Atlantic, Mediterranean, Pacific and South China Sea. After 3½ years of active duty, he earned a Masters Degree in Meteorology at the University of Chicago in 1946 with the aid of the GI Bill. He taught physics and meteorology at NC State for a few months before joining the U.S. Weather Bureau in Washington, DC in 1947. He had a variety of exciting assignments in weather research and forecasting. During the Korean War (1951-54), he was recalled to active duty as a weather research officer at Project AROWA (Applied Research Operational Weather Analysis) in Norfolk, VA. He retired from the Navy as Captain in the Reserves. Returning to the Weather Bureau he had a series of ever more challenging assignments in weather in the DC area before being granted a Governmental Scholarship in Meteorology at Florida State University; then back to DC and more weather related duties. In 1961 he was assigned to be Deputy Director of what was then the National Weather Records Center in Asheville, NC. In 1964 he became the Director until he retired in 1975. That center is now the National Centers for Environmental Information here in Asheville. Along the way he became a Fellow and Honorary Member of the American Meteorological Society; a past president of the National Council of Industrial Meteorologists; a member of the National Weather Association, and a student of climate change. After retiring from Federal Services in 1975, he formed the Climatological Consulting Corporation (CCC) and spent the next quarter of a century serving attorneys as a forensic meteorologist expert witness in a series of major weather related court cases. He sold CCC in 1999 and continued consulting in a self-owned small company, still specializing in weather. Bill had been a member of Rotary for 52 years. He joined the Downtown Asheville club in 1964, where he served as president in 1968-69 and District Governor in 1977-78. Bill then joined the Rotary Club of Asheville-Biltmore. He is a Paul Harris Fellow +10. He was very active in the Youth Council in the late 60s, and had served on the foundation committee for many years. Bill was also a member of the Pen and Plate Club of Asheville since 1968 and an honorary associate since 2011. He was a life long member of the Southern Appalachian Mineral Society and served as President and as a board member. Bill moved to Deerfield in 2008. He was elected to a two-year term on the Residents’ Council and served a two-year term as Chairman on the Employee Appreciation Committee. He enjoyed being involved in resident activities and still maintained his fascination with weather and climate. He published a book, "Weather In The Courtroom - Memoirs from a career in Forensic Meteorolgy" in 2016. Along with his parents, Bill is preceded in death by his wife, Martina W. Haggard; a son, William H. Haggard, Jr.; his older brother, Howard W. Haggard, Jr. and a sister, Marjorie Marie Whittaker. Bill is survived by his son, Robert H. Haggard. A Celebration of Life will be held at 2:30pm on Sunday, July 7, 2019 in St. Giles Chapel of Deerfield Retirement Community, 1617 Hendersonville Road, Asheville, NC 28803. In lieu of flowers, memorial contributions in Bill’s name may be made to the Blue Ridge Honor Flight, PO Box 18057, Asheville, NC 28814, the Employee Appreciation Fund at First Citizen’s Bank at Deerfield or a charity of your choice. www.blueridgehonorflight.com

William H. Haggard, 98, of Asheville passed away on Friday, June 21, 2019 at Deerfield Retirement Community. Bill Haggard is one of those very fortunate people who early in life knew what they wanted to do and did it. Born in Woodbridge, CT... View Obituary & Service Information

The family of William H. Haggard created this Life Tributes page to make it easy to share your memories.

William H. Haggard, 98, of Asheville passed away on Friday, June...

Send flowers to the Haggard family.